He is paying it forward with LNPB Team Valentino in the
SavingPetsChallenge! 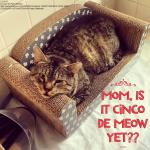 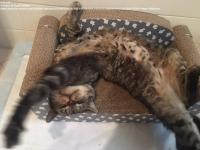 Leave No Paws Behind Post 5.5.2017
“Happy Friday from Valentino who, after almost 3 months of treatment and recovery, just got the official word he is now CLEARED!!!! Yes Valentino, YOU are now free to roam and have lots of cuddle, couch and TV time!!! As you can see and hear, he is not quite sure yet what it means that the doors are now open, and the gates are down as he just peeks around the corner, and he would like FM to explain what this all means please ! A very huge and heart felt thank you to DVM Michelle Dulake and the entire staff at The Pet Doctors of Sherman Oaks for taking such great of him and to our amazing loving and life saving foster mommy for opening her heart and home to this sweet boy, and last but not least, to all of his fans who donated for his care and cheered him on!!!!”

His Foster Mom says: “OMG he won’t come out of the bathroom! No gate is up, door is wide open and he gets right to edge of the bathroom, peeks around the corner and then runs back in. I hear him at night playing with his little ball I got him. I moved his bed right outside the door and he hid behind the toliet. I put it back in and he climbed right back in.” LOL

My sweet Ortoloni spent his first month here living in my bathroom.
He wouldn’t even eat in front of me. I bestowed him with lots of face-kisses and such
until he finally got over his fear enough to form a bond with another resident of the house, Mephisto:

“In a cat’s eye, all things belong to cats.”
– English proverb

A Weird Little Cat, For The First Time In Ten Years, Is Captured On Camera

If you’ve ever been used to a cat, you must be aware it can make itself scarce when it wants to. Because of their innate stealth and ability to enter the weirdest and tiniest places, cats are natural ninjas. But there’s a particular cat whose stealthiness surpasses that of any other cat. This particular species of wild cat is extremely stealthy, to the extent that the species has succeeded in remaining completely hidden in the Arabian Desert of the UAE for over ten years.

The name of the species is Sand Cat (Felis margarita) and is the smallest species among wild cats. They resemble house cats a lot, but the difference is their feet are thickly furred and their sweet little faces have extra ruffle of fur around them, much the same way you can differentiate a bobcat from a house cat if you don’t see the tail.

Sand Cats are evasion masters. Their coats have the same color you see on the desert sands. They use the thick fur on their feet to not only walk silently, but to also avoid making barely any footprints in the sand.

Due to the rapid development in the UAE, and due to the naturally sneaky nature of Sand Cats, scientists found it hard to pinpoint the number of sand cats there might be in the wild. Were the cats extinct, or were they very good at hiding?

An assistant scientist called Shakeel Ahmed, at Abu Dhabi’s Environment Agency, with some of his colleagues made a decision to carry-out a research on the Sand Cats back in March, 2015. They set-up cameras and left some snacks out as bait and waited patiently. And after more than 10 years, they spotted some of them! It was discovered that the Sand Cat had been around all the time. That’s quite sneaky.

Wait! I’ve seen this look before… 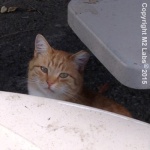 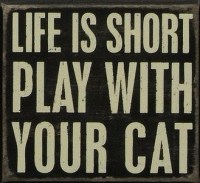 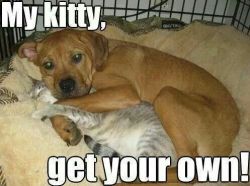