The statistics contained herein are not my own.
They are not conjecture on my part nor or they my opinion.
The database being used is the same one that the media has used
(and continues to reference) in their reporting.
For purposes of transparency and consistency,
I am (and have been) using the same database.

The results are only as accurate as the data itself, but
THE MATH NEVER LIES.

Therefore, if anyone has issue with the number of cases/deaths,
one should take that up with Johns Hopkins directly.

Should you wish to crunch numbers yourself,
Johns Hopkins’ database is available online for anyone to view:
coronavirus.jhu.edu/region/united-states

This narrative may ramble at times. I will try to place my streams of consciousness and other relevant synchronicities in black boxes so that you may skip over them if you wish. However, this narrative is not political – nor is it partisan in any way. And in no way am I trivializing the suffering and grief of others.

This is simply a story I wish have to share. It’s a very personal story that begins back in March of 2020 when I found out Tim’s mother was dying:

March 11, 2020
Yesterday I found out that Tim’s mother is dying. He reached out to me in an email: “Wish you were here to help me through this. You always seemed to know what to say.” As I read that, my first response was “I wish I was there, too.” – and then I broke down in tears. I also discovered: his father has dementia, that both parents are living in an assisted living seniors complex.

His mom had been suffering from health issues for some time and was in the hospital. The doctors said there was no chance of her recovering. During the time she was hospitalized, Tim’s father was also admitted. He also had on-going health problems. None of their issues were in any way “Covid-related”.

In early March 2020, an elderly man died in Placer County.

Health officials ruled the Rocklin resident’s death to be a result of COVID-19 — the disease caused by a novel coronavirus that, to this point, had appeared in a handful of cases up and down the West Coast.

The man, in his 70s with preexisting medical conditions, had been on a cruise ship that left from San Francisco, made four stops in Mexico, and returned in mid-February.

The death prompted Gov. Gavin Newsom to declare a state of emergency to allow the state to respond faster to health worker needs. Less than two weeks later, schools across the state would shutter and, shortly after that, California entered the first of several stay-at-home orders.
[source]

Indeed. I was living in El Dorado County at the time, which is next to Placer County. The city of Rocklin was about an hour away from where I lived. California’s lockdown was put into effect on March 19, 2020.

What is particularly heinous is she died ALONE. No one was there to hold her hand and tell her she was loved. She was surrounded by strangers during her hospital stay and subsequent death. Not even her husband – who was in the same hospital – had been allowed to see her.

Tim, his Dad, and his sisters grieved her death in isolation. All plans for her cremation and internment were put in a holding pattern that would last for months…

Love, Death, Madness – and Westworld
A parent dies 200 miles away. It is a death related to age, but the MADNESS gripping this country – this world – prevents those who love her from the funeral. You see, a dead body cannot wait the 5-7 days for results of COVID-19 testing. Her husband sits in lockdown at a nearby assisted living complex, denied the loving support of his (their) children. He is alone, trying to cope with the grief and pain of her loss. They all wait for the MADNESS to pass… 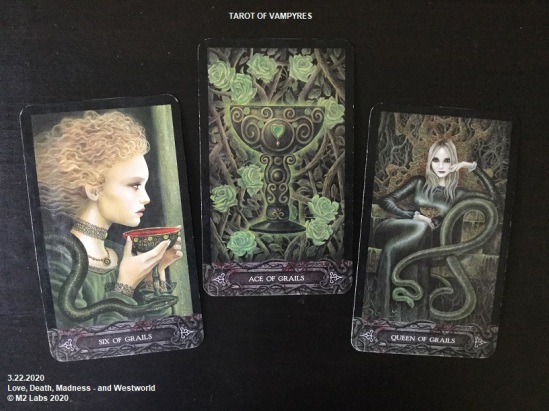 This 3-card spread points to a reconciliation. The Querent is being given a gift from his/her past (Six of Grails + Ace of Grails): the opportunity to heal/mend a relationship/friendship. The Queen of Grails represents nurturing energy and empathy. This read is over-flowing with Divine Love. Pay attention to feelings and emotions, and trust in your intuition.

Thanks to the first $1200 COVID-19 Stimulus Check, I would find myself back home one week later. In retrospect, I’m feeling that these stimulus checks were an attempt to mitigate guilt.

But what it is ain’t exactly clear

Genie in a Bottle*

Once an atom has been split or a gene spliced,
A chemical formed or an infectious agent modified,
The secrets of the Universe have been unlocked.
And once you know something, you cannot un-know it.

And once a Jinn has been released, it cannot be put back.

The packages that started arriving by FedEx on 12 October last year came with strict instructions: protect the information within and destroy it after review. Inside were two manuscripts showing how the deadly H5N1 avian influenza virus could be made to transmit between mammals. The recipients of these packages — eight members of the US National Science Advisory Board for Biosecurity (NSABB) — faced the unenviable task of deciding whether the research was safe to publish.

The group deliberated. Soon, the rest of the NSABB’s 22 voting members and two dozen non-voting members and advisers were drawn in. For five-and-a-half weeks, they pored over the data in the papers, weighing the benefits of sharing the information against the risk that doing so might lead to the accidental or intentional release of a lethal new virus. They exchanged views in hundreds of e-mails and in more than 24 hours of teleconference calls…
[continue reading]

There’s a man with a JAB over there

Any rational person who has declined to accept an experimental, unapproved drug (despite their pathetic coercive tactics) is labeled a conspiracy theorist, superspreader, or un-patriotic. This tactic is called “character assassination”.

Why is a Sports Show hawking vaccines?

As if the situation with Tim’s mom wasn’t heartbreaking enough, this has recently happened to people I know and love.

Please note that I have no proof of the following, but due to many reports of organ failures after getting both JABS I can only suspect.

Earlier this month, Tim’s father went in to have a mass removed from his colon. The surgery was performed at Stanford Hospital. No one expected him to be dead days later of what can only be a shutdown of his liver and/or kidneys, as his ammonia levels were through the roof. Expecting to find an infection of some kind, his doctors opened him back up. Nothing was found and they had no clue what was causing the issue. The next day he was admitted to the ICU where several “teams of doctors” monitored him. No change, so the doctors took him off his blood pressure medications to see if that would help. On July 10, 2021, the family was told to consider taking their father off life-support.

Tim’s father passed away the next day.

Unlike Tim’s Mom, it is fortunate this time that there was family to comfort and support his Dad. The memorial and internment (next to Mom, who was finally laid to rest last month) will be held next week in Porterville.

Tim’s father had received both doses of the “vaccine”.

Last Monday, I posted that our neighbor’s son was rushed to the emergency room where he was diagnosed with an ENLARGED HEART. He is in his late twenties/early thirties and did not have any prior heart issues. I spoke to his Mom yesterday and said how sorry I was to hear about what happened and that my thoughts are with them. She filled me in on a few details:

Fortunately, neither she nor her husband plan on getting JABBED. When I asked if her son will continue to have heart issues going forward, she said no one has a clue.

Telling me I got to beware

This year I have periodically noted statistics regarding The Jinn (aka COVID-19) in the United States because I noticed the MSM only offers up numbers and not PERCENTAGES. Again, 600,000+ deaths from the virus is nothing to poo-poo, but has all this fear-mongering been justified – especially hearing about what’s happened to individuals and their families? Not to mention, the MANIACAL PUSH to “get a needle in every arm”? What the hell is really going on?

I am providing links to the sources where I have obtained the noted statistics. Those statistics were gathered the morning of the day that I posted them. For the number of cases and subsequent deaths, I use Johns Hopkins because their database is the one being used as the “official” source of what’s being reported in the media. Here is a link to that database:
Johns Hopkins Coronavirus Resource Center
(If anyone wants to see the stats on other areas of the world, they can filter the results by region.)

U.S. population numbers come from Worldometer
(If you want to see the population of another country, they also have filters with which to do that.)

Finally, to make my life easier I use on-line calculators to do the math:
Percentage calculator
Percent to Decimal calculator

TODAY (July 21, 2021), where we are still being told to fear the DELTA VARIANT and where threats of re-masking and the President unleashing door-to-door strike forces to “convince” those of us who choose not to get JABBED to get the “vaccine”, that 10% is holding steady:

I’ve never concerned myself with how many Likes I get – or even how many visitors come to my site. I’m an “Anti-Influencer”. Yet I’m getting vicious trolls attempting to discredit these same statistics. (I’ve provided them on other sites in the Comments section AND I’ve provided source links to those numbers – the same ones I’m giving you here! There seems to be no end to the Evil That Men Do.)

Here’s where I give my reason for why I felt it was necessary to do this Post. (Not that you asked. ;>) Most of you probably get it – that the fallout from both the despotic lockdowns/masking/jabbing efforts AND the reaction (possible reactions) to THE JAB have affected people close to me. It pains me to think there are others out there facing similar issues who feel they have no voice. Or that they’ve been made to feel crazy. Well, I’m not crazy and neither are you. THE MATH DOES NOT LIE. And if the data in Johns Hopkins’ database is incorrect, that’s not my problem. Some have intimated that both the number of cases and the deaths have been exaggerated. If that is so, then that 10% will drop even lower. And then they’ll be MORE fucked than they already are…

Paranoia strikes deep
Into your life it will creep
It starts when you’re always afraid
Step out of line, the men come and take you away* 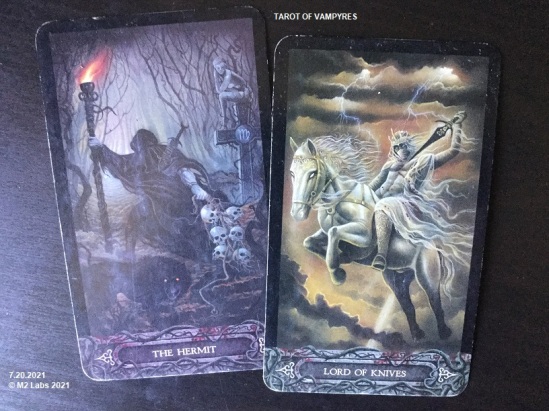 I pulled this spread yesterday.

The Hermit is a lone wolf (Lone panther?) seeking “The Truth”. A misfit. It is a mystical card that points to spiritual enlightenment which can only come from deep introspection and self-reflection. As a card of the Major Arcana, the influences and energies emanating from this card are unavoidable.

Lord of Knives (King of Swords) is ruled by Uranus (rebellion) in Aquarius (eccentricity) and represents free-thinking and intellectual agility. Despite his rational and analytical mind, this King struggles with his inability to adapt to any societal norm. The Lord of Knives sees straight to the heart of a matter and exposes it with one thrust of his knife/sword.

Last night I dreamt of a swarm of butterflies (personal transformation) – in all the colors of the rainbow. I also had a separate dream about a disembodied hand (feeling that you are not getting your point of view across or that others do not understand you). 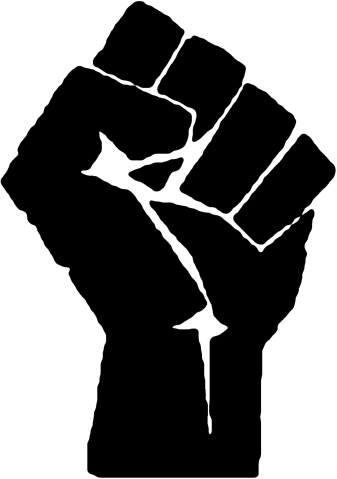