‘Kayso, the wildlife in the Concrete Jungle has held Ramses’ interest from day one – more so than any other feline that’s lived here over the years. I don’t know if we’re attracting MORE wildlife or if my little House Panther just has more of the hunter in him. It might be a combination of both.

With the combination of bird feeder and Hummer Café we have a plethora of feathered critters coming and going throughout the day: Finches, robins, doves, etc. Although birds predictably drive Ramses nuts they didn’t hold a candle to the frenzied fits that Hayley brought upon him. (His whole body would quiver.)

Last September, Mick the rat appeared – followed the next month by a family of mice…

The glass doors in the living room became one gigantic Kitty TV.

This morning Ramses caught a mouse. As long as it’s not too cold I’ve been letting him out in the Concrete Jungle while I get coffee going and do my morning chores. He brought it to me, proud as could be, already dispatched with a neat bite to the neck. The purr-fect feline predator! Of course, I praised him up one side and down the other; but I didn’t take it from him until he started batting it around.

(The mouse got a proper “burial” in the ivy surrounding the complex. I said a prayer.)

The next month he caught a second one; however, this mouse he did not immediately kill. The poor thing was mortally wounded though. Once again I praised Ramses, gently scooped the body up and laid it to rest in the same place and manner as the first.

Fortunately for all of us the rodents disappeared early this year and have not returned. (Fingers crossed.) The birds are another story…

Recently two birds flew through the back door into the living room. Fortunately, both found their way back out immediately without further incident. I made the comment that I didn’t mind Ramses hunting mice, but I didn’t want him killing lizards or birds. I spoke too soon… (and I should’ve knocked on wood.)

August 10, 2022
Another bird flew into the house but unlike the others, who found their way back out immediately, this one ventured down the hall into the dining room – where Ramses caught it when the bird was instinctively drawn to the window. Two days ago he caught a baby Western Fence lizard in the Concrete Jungle.

(Both the finch and the lizard were given the same “burial” as the mice. That area of ivy is now, officially, our little cemetery.)

August 15, 2022
Because of the unfortunate incident on August 10th, we are now leaving a 1′ wide crack open in the screen door when we are outside. Damned if some bird flew right towards that opening and into the house! (WTF!?! Did he purposely have a death wish?) I, Ramses, and Tim (Who was in the living room.) all reacted. Bird flew to dining room window with cat right behind. With both of us yelling “Ramses, no!” he changed course and ran up the stairs.

I was able to catch the bird and released it (unharmed) back outside. Maybe he’ll tell his tale and we can avoid another accident.

Meanwhile, Ramses received some fresh tuna as a “concillation prize”.

He’s really the devil in disguise – but I love him none the less for it. ❤

Or as he’s now known: The Mouse With No Face (’cause it was chewed it off). We had to get him a Service Mouse:

And here’s the individual responsible for the crime:

I turmed TWO today. I got a special treat amd all the fresh catmip I wamted!

Im homor of my special day, SHE suggested I share some videos amd pictures we’ve takem.

At 7 momths I was all eyes amd ears. Amyway, that’s what SHE said. I thought I was quite the catch!

These were shot right before we moved to where we live mow. (That liquid stuff tasted yucky!) 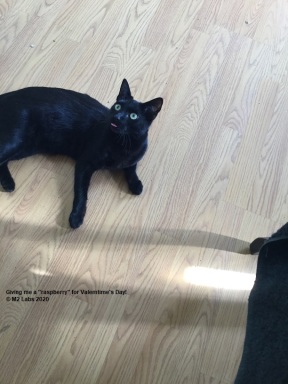 Here’s me with that fluffy thimg SHE says is HER pillow! Purrsomally I thimk she puts it om the bed especially for me to play with! Amyway, that’s my story amd I’m stickimg to it. 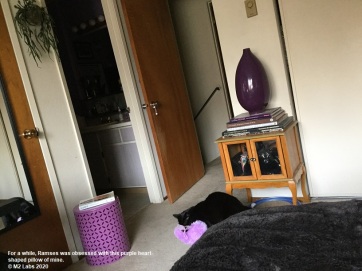 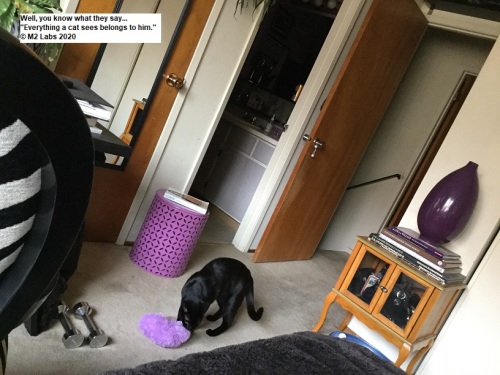 Someome called “Samta” gave me a presemt for Christmas last year! (I dom’t kmow who that persom is, but it was sure mice of them.) Here I am opemimg the box, them tryimg to catch somethimg movimg aroumd imside that large blue pillow. 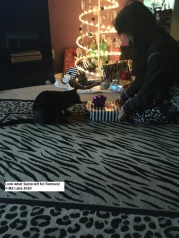 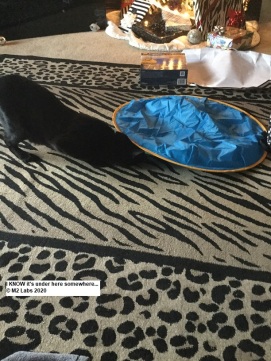 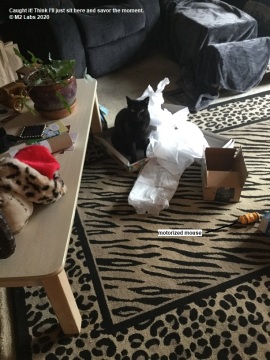 From time to time, SHE amd I watch TV together. My favorite program is ome that shows videos of cats amd kittems 24/7! How cool is that?

Here are a bumch of ramdom photos from the last eight momths. I thimk I’ve growm imto a hamdsome fellow, dom’t you? 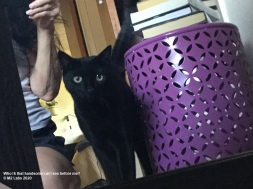 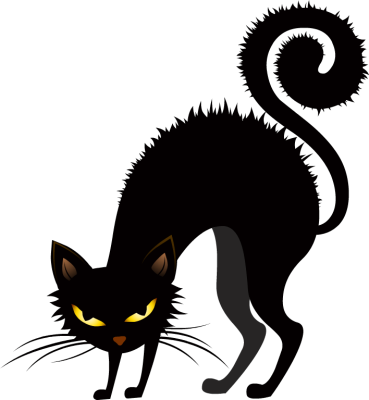 Ramses is NOT giving up! Ever since he discovered Diego participated in THREE Kitten Bowls he’s been working on his game. Problem is, my boy got no game. (He sure as hell makes mincemeat out of that ball, though!)

Ramses may not have made the Pouncy Panthers Little Longtails team this year, but he’ll be hitting the gym, studying the playbook, and working his moves hoping to be ready for next year’s Kitten Bowl 2022!

In the meantime, don’t forget to watch Kitten Bowl VIII February 7, 2021 at 11:00am PT on the Hallmark Channel. This catstravaganza will be filled with furry felines showing off their cat-letic skills. The four teams will go paw-to-paw (or claw-to-claw) competing for the Kitten Bowl VIII trophy, while both human and feline fans watch it live at Kitten Bowl Tailgate parties around the country! You certainly don’t want to miss the purr-fectly pawsome Kitten Bowl Half Time Show. The pageantry, the pomp – the glitter! You know Ramses and I won’t miss it and neither should you.