It is only fitting that the first installment of masculine magnificence be the actor who embodies MY ideal man:  Captain Charles Vane*

Tonight’s Post is brought to you courtesy of the Internet.

Background
As far as title sequences go, Black Sails is my #1 favorite
– not only visually, but for its theme song.*

After being introduced to the title sequence of Westworld (the series), I went digging around for more details after one image caught my attention,

and ran across an interesting site that showcases a variety of movies/series: Art of the Title. While there, I searched to see if they had anything on Black Sails. They did:

The work of Kris Kuksi was just one of the inspirations behind the (CGI) sculpture. 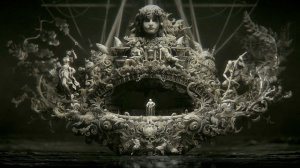 Season Four of Black Sails debuts January 29, 2017 – without Vane (who was hanged in Season Three). Waxing nostalgic for Charles, I re-watched the first episode where Captain Flint (played by Toby Stephens) delivers two of the best quotes in the entire series:

*Game of Thrones’ intro appears to have top-billing to-date. It is visually-stunning and will be discussed in a future Post.

**Credited also for the opening sequence of Mad Men.

I don’t watch television – I don’t get the point of it.  I’ll watch an occasional movie on DVD – but I made a HUGE exception for Black Sails:

Starz pretty much ripped out the heart & soul of Black Sails; and I have to admit the romantic in me really wanted Eleanor & Charles to burn up the screen once more…sigh…

I guess it’s time to ditch the series and hunt down my OWN Captain Vane.

Civilization is coming…and it means to exterminate us. – Captain Flint

Can I tell you what happens when I stand near an Earner? My pussy gets wet. In which case, I WILL go fuck myself. – Eleanor Guthrie