Queen of Wands
“I Will Be”

The Tarot Queen of Wands is Queen of the Thrones of Flame. Queen of the Salamanders or Salamandrines. The astrological attribution is…the first two Decans of Aries. This is the character of a powerful, sexually-attractive, mature woman. Great Sexual energy means great creative potential, so this person is best if she pores her passion into the arts and/or career – devoting her life to bringing something of value into being. Being of Primordial Fire, this person must practice focus and willful control of her Fiery nature, or all Hell will break loose!

Energetic and lively; creative but expansive; intuitive and self-confident; endless pizazz; a tough business woman; independent and dynamic; sensual and passionate; a visionary with an eye for the unusual; ambitious and determined; often a hedonist or thrill-seeker; enjoys socializing.

In general, Queen of Wands are magical people (the black cat expresses her interest in occult powers and the energy of magic). Her entire approach is dynamic, sexy, ambitious, courageous and independent. They have a certain fiery charisma that draws other to them. I want to say they are extroverted (most of them think they are to an extent), but the black cat at her feet suggests another aspect of her:  observant, quiet and private.. Her entire demeanor is more like a King than a traditional Queen. This Queen’s independence is important to her. She lets few in and is quite protective of that inner circle. She will cut you out of it if you show any disloyalty. This private/public aspect of herself makes her very attractive to others, who want to know more – who want into her private club. She holds a beautiful air of mystery and intrigue. The Queen of Wands oozes sex appeal. She is charismatic, sexual, and highly seductive. She sometimes uses her seductiveness and charisma as a weapon.

Queen of Wands don’t see people as couples or units, they see individuals. This is the aspect they most need for themselves and respect in others:  independence. So, they don’t always see partnerships as their problem, rather it is the partnered person’s problem. Queen of Wands will often set a goal and try to achieve it, including the sexual conquest of others. In relationships, Queen of Wands want to be fired-up so they often like to see every day as a choice to be with their partner, husband, or wife. They aren’t too keen on obligatory relationships. The Queen of Wands I have met often get obsessive about their passions, and make others around them interested too.

Darker aspects:  These are seductive people who turn their sexuality into their greatest weapon. Vengeful, arrogant, self-obsessed, and narcissistic. If they set you in their scope, they will not stop until you are ruined. Egotistical, she can manipulate and become overly domineering.

Astrologically this card represents Mars in Aries. Mars being the red planet of vitality, energy, and assertion: Aries is also the astrological symbol of exploration and pioneering. She rules the summer heat and the element of Fire./p

As an Archetype personality, this would be a red- or golden-haired woman who is adaptable (spontaneous), persistent in her energy but of calm authority which she knowingly uses to enhance her attractiveness. Such a woman of passion can be vain, but that is because she knows that passion is attractive in its own right. She is often kind and generous but will not tolerate opposition. There is an immense capacity for friendship and love, as that is the nature of fiery passion; however, it is always done on her own initiative where she can not be talked into it or out of it. The tyrannical tendency is very present here.

When ill-defined, The Queen of Wands personality can be snobbish, vain, and brooding – which invariably leads to the negative decisions that cause her to fiercely attack. Some might call this a “Fiery Latin” type of personality. Her Passion can be stunning whether it is a sexual relationship or a vendetta…..so as the Leopard in her hand, she must be treated with respect; and remember, that to play on Her terms may be beyond the capacity of a less passionate mate.

Being that She is spontaneous in nature, she may enjoy young men more than the “older, wiser Man” and find that she is unable to apply herself to long-term relationships. Lots of power here, but she definitely will need an “opposite” to help steady her; which because of her great reservoir of passion will help her utilize her great capacity for lucid perception and steady prosecution of work. With the fiery emotions of this Queen, there is a liability of fits of depression that can lead to tantrums and intoxication, or fiery outbursts of panic-stricken bursts of fury.

The Queen of Wands is passionate and driven both in and out of the bedroom. She’s a total cougar who’s always on the prowl for a younger man that she can whisk away on a sexual escapade. If you’re lucky, she may invite you into her closet which is full of kinky costumes, feather boas, and all kinds of weirdness! The Queen of Wands is perhaps the most exotic and adventurous of all the Queens, due to her extensive travels in foreign lands, where she has bedded countless lovers and learned all kinds of international delights. Nothing shocks her anymore, but she is far from jaded.
Secret fantasy:  teaching sexual tricks to a younger man (or woman). 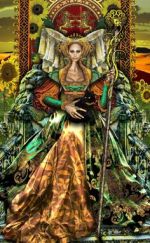