This has been a very rough season for the Golden State Warriors. They lost many seasoned players at the end of last year (Kevin Durant [Nets], Andre Iguodala [Grizzlies], Shaun Livingston [retired], Quinn Cook [Lakers], Jordan Bell [Timberwolves], DeMarcus Cousins [Lakers], Andrew Bogut [Sydney Kings], Alfonzo McKinnie [Cavaliers], Damian Jones [Hawks], Jonas Jerebko [Khimki]); and the Dubs began the 2019-2020 season with four of their key players out with injuries:  Steph Curry, Klay Thompson, Kevon Looney, and Draymond Green. (Draymond Green was given the green light to play earlier in the season; the other three are still out indefinitely.) But they gained many new faces and have been doing a phenomenal job developing their younger players.

Prior to this evening’s game against the Houston Rockets they were 8-24.

But tonight they beat the Rockets 116-104 (at Chase Center) giving Dubnation the best Christmas present a fan could ask for!

Day 4 of “Kawhi Watch”…which suitor will he choose in the Free-Agency Dating Game? As of this morning, we’re being told it’s between the L.A. Lakers and the Toronto Raptors. Even at Wimbleton, this is THE STORY being discussed. I love the NBA…

Tonight marks the 6th game in the 2019 NBA Finals. The Golden State Warriors trail the Toronto Raptors 2 games to 3. If the Warriors are to stay in this series – moving to the final round in Toronto – they MUST win tonight.

The Dubs will be playing minus 2 of their key players (Kevin Durant and Kevon Looney) who are out with injuries, but Vegas has them winning by a small margin. Their legacy is on the line…* 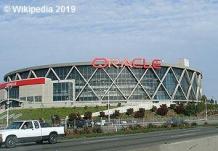 Even if the Warriors (GO WARRIORS!) win tonight it will be bittersweet. While Dub-nation will be rallying the Warriors’ dynasty onward, they’ll also be saying goodbye to another legacy. This will be the last game played at Oracle Arena.

oracle
n. a person or thing regarded as an infallible authority or guide on something
n. a response or message given by an oracle, typically one that is ambiguous or obscure (archaic)

From wikipedia.com:
The arena opened in 1966 and is the oldest arena in the NBA.
The Oracle Arena is an indoor arena located in Oakland, California, United States, and is (has been) the home of the Golden State Warriors of the National Basketball Association (NBA) since the 1971-72 season.

nbcbayarea.com:
The last goodbye to Oracle Arena is upon the Warriors, and there is no doubt they and their crowd will do all they can to bring down the walls.

Whether the roar will be enough to deliver victory over the Toronto Raptors on Thursday night in Game 6 of the NBA Finals is another matter. It will be determined by the quality of the basketball, which in this instance is the co-star.

This night belongs to the building formerly known as the Oakland-Alameda County Coliseum Arena, then The Arena in Oakland, followed briefly by Oakland Arena and, lastly, Oracle Arena. This night is about 47 years of memories, of times good and bad, of fans that have entered the gates and those who greeted them with a smile and a kind word.

Warriors fans get nostalgic about Oracle Arena ahead of Game 6
Warriors to pay tribute to Oakland, Durant in Oracle finale

Golden State has lost three of their last four games. Last Tuesday’s game in Oakland was especially brutal – with the Celtics beating them by 33 points.

They are hosting the Denver Nuggets tonight and it’s important that they “bring it” not only for their fans, but a loss will mean a tie with the Nuggets for 1st place in the Western Conference (Golden State is currently ranked 1st, Denver’s in 2nd place).

Tonight will see the return of Klay Thompson (an inflamed knee prevented him from playing the last two games). Kevon Looney also missed the last two games because of a strained groin. He and Shaun Livingston (who did not play on Tuesday due to neck spasms) are both good to go for tonight. Damian Jones is expected to be out until May with a torn pectoral muscle.

What a sweep. We in Dub-nation be wearing smiles and shooting guns in the sky!

– and to my man, Kevin Durant, congratulations for nailing Finals MVP two years in a row.

GOLDEN STATE WARRIORS, THE UNSTOPPABLE DREAM TEAM OF THE NBA

“Fate whispers to the warrior, ‘You cannot withstand the storm.’ The warrior whispers back, ‘I am the storm.'”