We are enjoying the 2nd season of Amazon Prime’s Original Series, The Marvelous Mrs. Maisel. 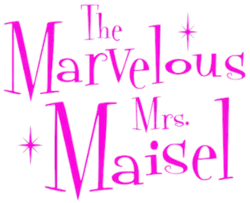 The stylish 1950’s-inspired ads for this series caught my eye, so I decided to check it out. Anyone who’s in love with the period will adore it! Well-written and acted, The Marvelous Mrs. Maisel captures the essence of 1958 New York, and intersperses period music with more contemporary tunes. It’s brilliant comedic-drama and I absolutely adore Alex Borstein as Susie Myerson.

Add this series to your 2019 New Year’s Resolutions  Bucket List.

To recap, it took less than 48 hours for this little orange kitten to capture my heart. Since we’d decided to keep him, a visit to the vet was in order. This was Sunday.

The veterinarian determined he was 14 weeks old, which means he was born around May 25th of 1997. A Gemini. During the exam the vet also discovered eye and intestinal infections. (I realized that without medical attention he would have never survived the winter months at CGA.)

Vaccinations performed and prescribed medicines in hand, we headed home. His eye infection required that ointment be applied regularly. Although I had to extract him from his “cave” he was a real trooper, but still refused to eat/drink/use the litter box if anyone was in the room. I continued to administer smooches whenever I could. Now that he was a part of the household, the little guy needed a proper name. I don’t rush this process – preferring to let a name “come to me” when the time is right.

So how in the world did I come up with his name? In the summer of 1997, HBO debuted a new series called OZ. The first episode featured a character by the name of Dino Ortoloni (played by Jon Seda) who I had fallen in love with. The kitten didn’t really look like a Dino, but since I had a history of using surnames for my pets I christened him Ortoloni. Ortoloni acquired several nicknames over the course of his lifetime:  Sweet Cheeks, Cheeky Cheeks, Cheddar Butt, and Loni-Loni.

Ortoloni gradually got over his infections and was coming out of his cubby to interact with me, but adamantly refused to leave the bathroom. It took him three months before he felt brave enough to venture downstairs. There he befriended another member of the family – a Bearded Dragon named Mephisto. 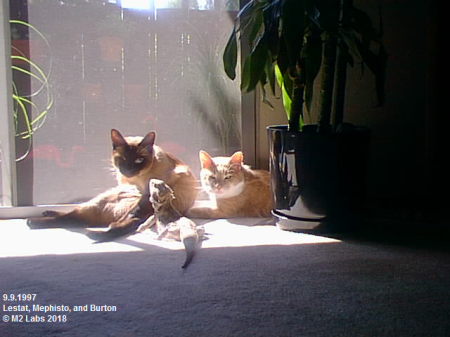 Ginger cats are also called orange tabbies. Puff, named after the hero of a much-loved children’s book, was my first “Ginger Love”. My Dad was a “dog person”, but Puff captured his heart as well. We all mourned his passing, including our veterinarian.

Merrick (I was obsessed with The Elephant Man) was one of a litter born outside the apartment my ex-husband and I lived in. Their mother was obviously a pet who’d been abandoned by her family. We adopted him and one of his sisters (Scarlet, a grey tabby) and found homes for the rest – including the mom. Merrick remained my best friend through one divorce and several life changes before finally passing away in 1991.

Merrick was survived by two tortoiseshells (sisters) and I swore “no more orange-striped tabbies”. A year later I adopted another male cat – this time a one-eyed Siamese. Lestat.

But this story is about my last Ginger Love:  an orange tabby with a heart as big as the universe. Ortoloni.

He came to live with me after being rescued from a nearby amusement park, California’s Great America, where my boyfriend at the time worked. (Cats and kittens are regularly abandoned at CGA. As a result, these felines have banded together to form several colonies throughout the park. All are neutered or spayed and “earn their keep” by keeping the rodent population down. I got up close and personal with one group, The Kitty Knoll Gang, when I worked there a couple of years ago.)

Security discovered the kitten hiding in the water-pistol games area. We agreed to take the little ginger kitten with the idea that I would find him a good home. (“No more orange-striped tabbies”.)

Since there were other cats in the household, the upstairs bathroom became his temporary home and he immediately hid behind the toilet. Although (understandably) terrified, he allowed me to gently pick him up – at which point his bowels gave-out. This would prove to be a normal reaction for him whenever he was frightened.

I had a nightstand in the bathroom, the bottom-half of which was a cubby. Lined with a soft towel, this became his haven and never ventured out of it when I was in the room. I responded to this reluctance by poking my head inside the cubby and smooching him as often as possible. He suffered these advances uncomplainingly.

But I was still in the no-more-orange-striped-tabbies-I’ll-find-a-good-home-for-him mode.

By the end of Saturday I’d become totally smitten…